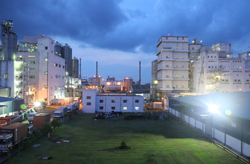 Approximately 130 km south of Kolkata, the PET resin plant of the company started commercial production in September, 2003 with a capacity of 1,40,000 TPA. In 2005 the capacity was expanded
to 1,80,000 TPA, which was further increased to 200,000 TPA in November, 2007 by de bottle-necking- Our PET resin plant is rated among the world’s most advanced PET resin manufacturing facilities. It was established with world-class German technology.

To cater to the growing world market, we have to establish a new 210,000-TPA PET resin plant which was commenced in FY 2012-13 with state- of-the-art German technology. The new plant is located adjacent to the existing plant.

Haldia is a city and a municipality at Purba Midnapore in West Bengal. It is a major port on River Hooghly, one of the tributaries of the Ganges, located around 50 kilometers southwest of Kolkata port. The Haldia factory is situated 7 km from the port, giving it an advantage on the logistics with respect to imports and exports.